We all stand by the statement that permission to screen this short video report at the Press Club of India (PCI) on 14 August was denied, reportedly under pressure. Our quarrel is not and was not with the PCI, but with the Government of India that is seeking to censor such spaces. We need to unitedly resist such censorship.

We also object to the misleading and hostile comments made by the Prime Minister, the Government and certain propagandist media outlets, inciting animosity towards Indian citizens who are speaking up against the clampdown on democracy in Kashmir.

We also caution against possible attempts by the government of Pakistan to fish in the troubled waters, sponsor cross-border terror and appropriate the Kashmir issue for its own vested interests.

The voices, concerns, and sufferings of the Kashmiri people must not, yet again, be reduced to an India-Pakistan slanging match. The people of Jammu & Kashmir must have a voice in matters and decisions that concern their lives and region*. 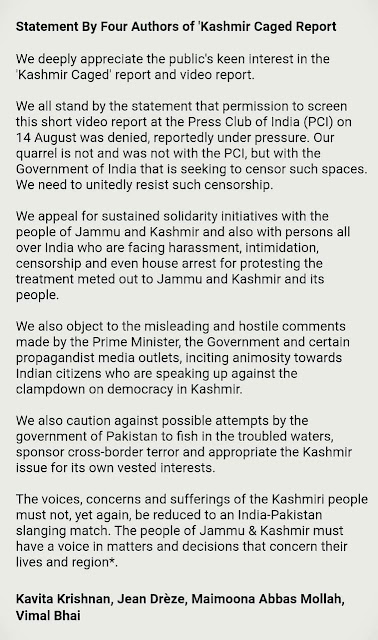 This is a Hindi website, where we share helpful information for beginners, you can find here "what is... in Hindi?" articles and learn something new everyday. ♥